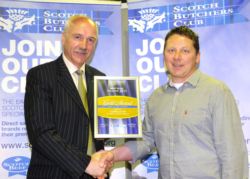 Muirhead butcher Stewart Collins collected more awards for his innovative meat products this week when the 2011 Meat To Go Awards were presented on Sunday 8th May at the Scottish Meat Trades Fair in Perth. Their Marinated Lamb with Orange Mint had that winning formula this time earning butchers S Collins & Son a Gold Award in the “Meat to Go” event organised by the Scottish Federation of Meat Traders for Scotland’s Craft Butchers. Jack Broussine of Quality Meat Scotland’s Scotch Butchers Club, sponsor of the competition said:- “The Meat to Go Awards once again showcase the high levels of skill and innovation prevalent in the independent butcher’s sector of the Scottish red meat industry. Without doubt this event leads to consumers being tempted with even more exciting new products when shopping at the local butcher.” Billy McFarlane, President of organisers, the Scottish Federation of Meat Traders said:- “Scottish Craft Butchers are great innovators and react quickly to customers demands for tasty convenient new products. These awards are an illustration of the reason why so many people are shopping at independent Craft Butchers.”

1kg of Pork Links £5* West of Scotland champion, our pork links are packed with flavour! Made using a secret family recipe... read more

Who doesn't love Valentines Day? For a day dedicated to celebrating each other, we decided to show our love for... read more 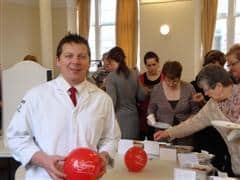 We have been busy over the last couple of months visiting local Slimming World Classes. We provide hot tasters of... read more

For the several years S Collins & Son have been a proud kit sponsor of the local u14 football team... read more

Training is obviously an important part for any athlete. But we are all just human, and we can get bored... read more 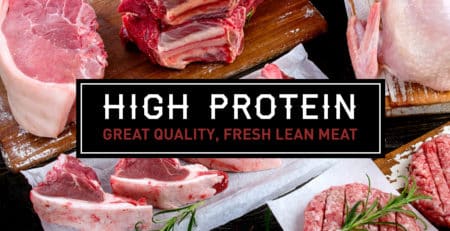 PACK A PUNCH WITH OUR PROTEIN RANGE!

We have a fantastic range of protein products to suit everyone needs, whether you're a gym goer, slimmer or just... read more